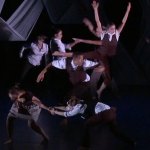 Nhan Ho of the Nhan Ho Project was working on a large group piece about a woman who falls in and out of time. He wanted experimental electronic music with syncopated delays and counterpoints that the dancers could play against. I had just recently received my custom-modified RX17 drum machine back from Logan Erickson at Low-Gain Electronics and thought this would be the perfect first use. I routed the modded RX17 through an MFC42 analog filter, played around with the resonance, synchronized the MIDI through Logic and layered in a few other synth sounds. Time premiered at the Santa Clara Convention Theatre on April 30, 2011 as part of the Nhan Ho Project’s debut show, From Light to Dark.